Jack Ross is currently the manager of Sunderland.

During his playing career, Ross played as a defender and midfielder. From 1992 to 1995 he played for youth sides at Dundee and Forfar Athletic, before dropping to the Scottish Junior leagues for first team action at CamelonJuniors. He then returned to the Scottish Football League  in 1999 with Clyde, before a short stint in England with Hartlepool United  in 2004. He returned to Scotland a year later and played for Falkirk, St Mirren, Hamilton Academical and Dunfermline Athletic until he retired in 2011 due to a knee injury. He also played once for a Scotland B team, in 2009.

Upon retiring, Ross started as a coaching career at Dumbarton, as assistant manager for both Alan Adamson and later Ian Murray, and was caretaker manager between them. He became the coach of the Heart of Midlothian under-20 team in July 2014. Ross was appointed AlloaAthletic manager in December 2015. In October 2016, he was appointed manager of St Mirren, leading them to the  2017-18 Scottish Championship  title and was named PFA Scotland Manager of the Year, before leaving to become manager of Sunderland in May 2018. 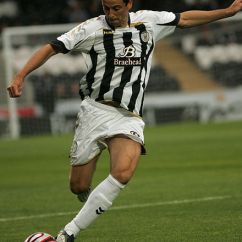